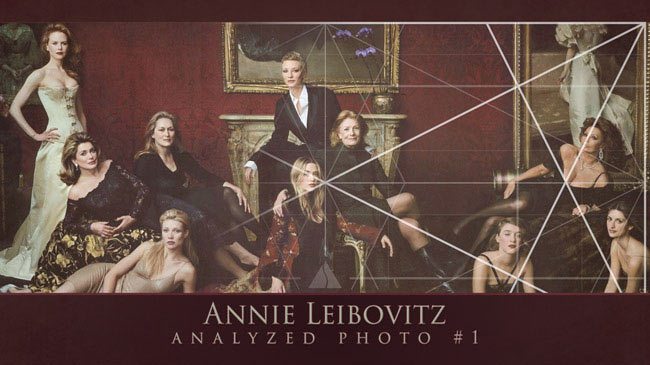 How does Annie Leibovitz use composition in her photography? Well, we are going to be looking at that today! This will be the first analyzed image of the 365 project. None of these design and composition techniques were covered yet, but I just want to introduce you to everything, and then we’ll chip away at it later in the 365. You’ll slowly understand how they use these techniques to create a professional, well organized photo.

Why did I pick Annie Leibovitz? Well, she’s pretty much known by everyone, which makes her a great subject to analyze. I also admire most of her work. Now, when I say Annie Leibovitz, I can’t leave out her team. I know she couldn’t shoot all of those amazing setups and perfect the composition by herself. And who knows, she may just show up, press the shutter button and “BANG”, it’s an Annie Leibovitz image. Someone has to take ALL of the credit right?

Rule of Thirds – I will always show how the rule of thirds lines up with the image. Do any of the pros use it? If they are, they might be crippling their artistic potential (if this offends you, I’m sorry, but if you please hear me out and give design and composition techniques a chance you will discover an ability to better communicate your art). If you think the pros are using it…look deeper…under the surface. Are you robotically seeing things line up exactly on thirds as we’ve all been brainwashed to see (myself included), or are you seeing things lining up to the verticals, horizontals, diagonals, being united by ellipses, radiating lines, with figure ground relationship, and all of the other design elements?

Some people think Henri Cartier-Bresson used the rule of thirds, but if you look at Day 41, you’ll clearly see he’s designing his images to the 1.5 grid. Sure it may land on a third, but saying you are using the rule of thirds will lead your compositions into a dead end. In result, you’ll be creating an image without thinking about other design elements which are necessary for outstanding compositions.

So sure, you may see the mantle lining up, or a foot or hand here and there, but you can’t get this composition by using the rule of thirds. How do you organize the other women which aren’t on the rule of thirds grid, and still bring rhythm and movement to the image? That’s where design comes into play. The dynamic symmetry and other design elements will help guide you through the trials and tribulations of creating a composition that would make Da Vinci cry.

How would you organize 10 women celebrities, get them in the perfect position so they all relate to one another, keep the eye moving from one to the other, and unite the entire image? The following techniques listed below will supply the answer. And as I said above, this will be overwhelming, but don’t let it scare you. I will definitely cover all of these techniques in detail throughout the 365.

Root 4 Rectangle– The Root 4 rectangle is one of many dynamic rectangles. It consists of two squares. And you see all of those lines within it? That’s it’s internal skeleton…called it’s armature…it’s dynamic symmetry. It’s pretty simple to build and later in the following days I’ll show just how easy it is.

If you follow the lines of the basic armature, can you begin to see their heads and bodies lining up? No rule of thirds here!

Root Four with Major Area Divisions (MAD) – “More lines” you are thinking. Sure, but it’s pretty easy to get these as well. I just took the first root four and shrunk it down, so that there are now four root fours inside the big one. Confused? Don’t worry…I’ll explain it all…later….

Root 4 with three 1.5 rectangles-Ugh, more lines…yep, get use to it. Laying down these lines allow us to see how they might have planned out there composition.  The 1.5 rectangle is a square and a half. The same size as your dslr camera frame. In this image I have three of them side by side. Why?

Because I’m showing that sometimes, if you begin to analyze photos, that you may have a couple of different options to choose from. Since I don’t exactly know how Annie Leibovitz and her team composed this image, I have to do my best to solve the mystery. And in this case, I feel that the 1.5 rectangles line up better.

You can see how the lines begin to line up right? If not, take the time to follow each line with a pencil. Just dumb luck that they are lining up? I was skeptical too. These people are designing their photos, just like the old master painters and guess what? They aren’t telling anybody this secret!

1.5 rectangle – Here’s a single 1.5 rectangle. Heads lined up with the major diagonals, the arms lined up…what’s going on here?

1.5 Rectangle three in row– Can you see things starting to line up to this simple grid? The rule of thirds never taught us about diagonals…what the?? You can use diagonals too??

Locked into the Grid– this means that as the grid is layed down, the subjects are locked into it at certain points. If they aren’t locked in, they are paralleling a diagonal.

Gamut– this is the limited number of directions used in the image. For pictures and paintings, and other forms of art it’s different. I’ll get into it later, but with photos it’s pretty easy. The human body has two arms and two legs which can be positioned to create repetition and intervals….if you can work in the body and the head into the rhythm even better….echo it in the background and you are on your way!

This gamut not only creates movement, but it creates a rhythm that is speaking to the viewer in a subconscious way. Subconscious meaning that the vast majority of people don’t know how to read an image…they just know that it’s pleasing…they don’t know why. They “feel” it.

Rebated Square– it is said that some artists utilized the rebated square in their art. I haven’t found too many so far. I will always display it just as I do the rule of thirds. The rebated square is better than using the rule of thirds, but using dynamic symmetry in your rectangle is the best way to go. If you’ve already forgotten what dynamic symmetry (with the basic armature from above) is don’t worry, I will cover it extensively.

90 degree-the 90 degree angle is not only part of the basic armature, but it’s also a sign of strength. I will have a separate day dedicated to this subject, but for now just keep your eye out for it. I’m not talking about 90 degrees that are vertical or horizontal. It has to be at an angle to have any worth.

Arabesque-ah yes, the good old arabesque. I love this element! It’s very easy to find in nature within the trees and sky. The human body can form a nice arabesque. This is what truly moves the eye in an image…not plotting it on an off-center-crosshair like the rule of thirds claims. It’s the line of movement, the line of beauty…so sexy.

Ellipses-arcs and ellipses can be used to unite subjects or objects in the image. Follow the line of the ellipse from Nicole Kidman…do you see the heads being collected on the arc?

Enclosures-Enclosures are made up of simple geometric objects (triangle, circle, square) used to group objects and unite them. Do you see the two groups forming a triangle?

Figure Ground Relationship-one of the most important techniques to learn right off the bat. I draw a line around the subject until the background interferes with the readability of the image. So in this case, when the black meets the black it’s hard for the viewer to determine the true shape of the subject. Drawing a mental line around your subject before you take the picture will ensure there is good separation between figure (subject) and ground (background).

Coincidences-artists use these to create a movement from side to side, top to bottom, and on diagonals. It also helps unite the objects on a line of continuity. Follow the line, you will see forehead on the same level as chin, legs, bust…see how the lines are matching up from side to side?

Black and White Blur – (BW BLUR) Value scheme – I do this to get a better look at the value scheme used. Simply convert your image to black and white, then give it a blur as if you are squinting your eyes. I’ll be doing a video tutorial on this later, along with finding the GAC below (see Day 71).

Greatest Area of Contrast (GAC) – it’s proven our eyes will go to the greatest area of contrast. Knowing this will give you the power to control where your viewers eyes look first. This is also another technique you should be learning right off the bat. This has everything to do with light. Know where the brightest area of your scene is. If you can’t place your subject there, be aware that it will pull attention away from your subject…especially when it’s placed up against a darker value.

And that’s about it. There are a few more techniques like aerial perspective, and simultaneous contrast…all of the gestalt principles, gazing direction, but we’ll get to those eventually. But for the most part, whenever I analyze an image, I will be covering these techniques. Please let me know if you have any questions. If you are confused, don’t worry. Stick with it and I will be explaining everything in more detail.

The Rule of Thirds Killed Design and Left it for Dead – 1 of 365 What Makes Me an Expert on Composition?