Can an Artist be Born a Genius? 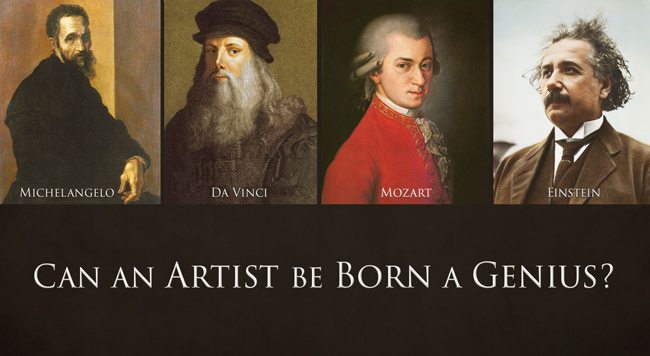 Hello to all of the artists out there! The other day I was having a conversation with a fellow artist, and a well-known question surfaced. Can an artist be born a genius? Michelangelo, Da Vinci, Mozart, Einstein…all of these names come to mind when the word “genius” is used. Were they born this way? Would Da Vinci’s mother admit that he came out of the womb grasping paint brushes and the ability to design war machines? Well, if we believe this way, we are not understanding things in a logical sense. These artists aren’t capable of more than us because they were “born that way,” it’s a combination of things within the environment they grew up in. There is hope for everyone to be exceptionally great, or genius, at something.


He Was Born a Genius, What Else Can Explain it?

Saying that someone was born a genius only means that we failed to give credit to their extreme efforts of discovering things further with imagination, influence, and internal/external encouragement. Michelangelo is known for saying, “if people knew how hard I worked to get my mastery, it wouldn’t seem so wonderful at all.” He wasn’t born with a chisel in his hand. He wasn’t born with the innate ability to sculpt, paint, or draw.

“If people knew how hard I worked to get my mastery, it wouldn’t seem so wonderful at all.” ~Michelangelo

Of course, this is my opinion; my realization. If I think logically, and do a little research, I find that none of them were born with genius. What I do think, is that they were born just as any of us were, but were surrounded by different influences, disciplines, inspirations, encouragement, and had access to the creative tools they needed to discover more. When all of these things are combined they help nurture a productive imagination. An imagination that creates remarkable art. Let’s not pawn it off on “oh, they were born that way, therefore I’m screwed because I never had a chance.”

Was Mozart Born a Genius, or Was His Genius Developed?

Mozart was musically influenced, disciplined, inspired, and encouraged from a very young age by his father (a violinist). He also had access to the creative tools he needed to discover more about music and how to create it. His imagination was swelling with musical masterpieces while he was still in his teens.

To achieve this “genius” status, Mozart couldn’t have had only one of these things. He couldn’t be successful with inspiration alone. He needed discipline. He couldn’t be successful with discipline alone. He needed imagination, encouragement, and the tools to create his art. If Mozart only had imagination, he probably would’ve only amounted to humming simple melodies in the shower. He wasn’t born a genius.

Take the same Mozart as a child and put him into a completely different environment. Maybe growing up on a farm, with an abusive father, sleeping on a bunk bed in a small room with three other siblings…hunting for deer, chopping wood to stay warm, wearing camouflage vests and chewing tobacco. Different Mozart right? I don’t think he would be itching to bang out some dreamy melodic tunes on the ol’ piano. You see, a combination of positive things have to happen in order to nurture an artistic genius. If we think logically, we know that no one is born this way.

It’s true that your friend Einstein might be better at math than you, or Da Vinci might be able to cook better than you. That’s perfectly fine. You know what I think? People, young or old, are more interested in certain skills, which inclines them to pursue things further. This doesn’t mean you can’t learn the same skill as your friend, it just means that you don’t have the drive to work through the pain because it doesn’t interest you. I suck at math and it causes me frustration and pain, but I know if I get mentored for about 5 years and really focus (even though I hate it), then surround myself with influence, inspiration, and encouragement, I will eventually begin to think differently….maybe even enjoy it. Yet, since math is something I have no interest in, I choose to focus on other things like composition, photography and drawing. A person’s interest in an already nurturing environment will determine the skill they choose to master.

The Beginning for Other Artists

I watched a YouTube video of an artist that started drawing merely because he wanted to play with Teenage Mutant Ninja Turtles and couldn’t afford the toys. He cut out cardboard characters and drew on them…he never stopped drawing after that. He started creating his art because of a childhood necessity. Another artist started getting into drawing because of the birth of digital art. Technology was the creative tool she needed to discover more about the drive inside her. They are not geniuses by any means (yet), but talented and surrounding themselves with that which will push them further.

Typical schools won’t offer much in the way of inspiration, imagination, encouragement, or proper discipline. They have some creative tools, but without a proper mentor, the potential for genius is lost. In college, I always strived to create the best graphic designs in the class, but it wasn’t a nurturing environment. The other students applied minimal effort, and the teacher didn’t discipline, inspire, or encourage us.

“The promises of this world are, for the most part, vain phantoms; and to confide in one’s self, and become something of worth and value is the best and safest course.” ~Michelangelo

If we didn’t have the nurturing environment when we were young, like Mozart, it’s up to us to create it for ourselves as adults. Rub your own two sticks together to create your own fire. Discipline yourself, be inspired, nurture your imagination, and allow encouragement to push you further.

Yes, encourage yourself! We may not have been born geniuses, but some of us eventually have a realization that we were meant for something greater than watching “The Kardashians” make fools of themselves or playing “Doodle Jump” on the iPhone. This drive pushes us through the pain of pursuit. Whether it hits us young, or old, we follow this developed impulse (Yes, this impulse is developed, we aren’t born with it. I didn’t find my impulse until college). We need to make a difference in the world with our art. We may even change our pursuit depending on the external elements that affect us, but we remain with this drive that we were meant to do something remarkable (I bounced from writing scripts to graphic design, making electronic music, photography, and now composition).

Here’s a great video that discusses some of the things I’m trying to point out. Some of the geniuses develop interests and abilities at a very, very young age. This is obvious that some humans develop quicker than others…just like the stages of puberty. It’s safe to say some children’s minds develop quicker and are able to retain more information.

If you look at all of the younger subjects in the video, they were all nurtured by their environment. Mom and Dad encouraged, inspired, disciplined, influenced, and provided the oil paints or piano for them to create their art. Another genius taught himself to memorize cards starting at the age of 20. He did this by relating the cards to pictures in his mind.

The geniuses that don’t fit into my realization that, artists aren’t born genius, are the children born with savant syndrome (see Rain Man the movie). In this case, their brain developed in certain areas more than others…leaving them mentally disabled, yet excelling in math or memorization of facts.

You may bounce from one interest to the other, but the thing that all of these geniuses have in common is that they stuck with the same thing…until they were old and grey. It’s ok to change your interest, but it will most likely prolong the mastering process.

Thanks for joining in today! I hope this inspires the genius within you! If you found this inspiring, please share it! I made it available to everyone because I feel it is important to inspire those artists who sometimes feel they never had a chance to create something remarkable. See you next time.

How to Break Out of Your Academic Training