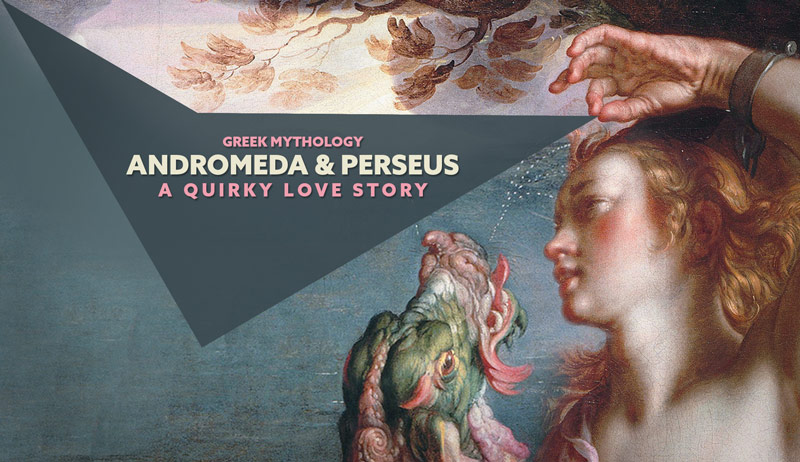 Thanks for joining to show your support everyone!

Today we are going to take a look at one of the quirkiest love stories ever told in Greek Mythology. We’ll also see tons of master paintings depicting the story differently, and cover a few design techniques found within them. Who is Andromeda and Perseus? Let’s find out now!

Andromeda was a popular female figure from Greek Mythology. She was painted at least a gazillion times by master painters. But why?

Since the nude body was considered taboo back in those days, the story of Andromeda gave painters a perfect excuse to do it for “the sake of history.” Who are we to complain? We’ve got tons of masterful paintings left behind…most of the best ones will be seen below.

Andromeda was the daughter of Cepheus who was King of Aethiopia (a.k.a. Ethiopia). Here are some Googled photos of the Ethiopian landscape. Pretty nice looking place to be King of! 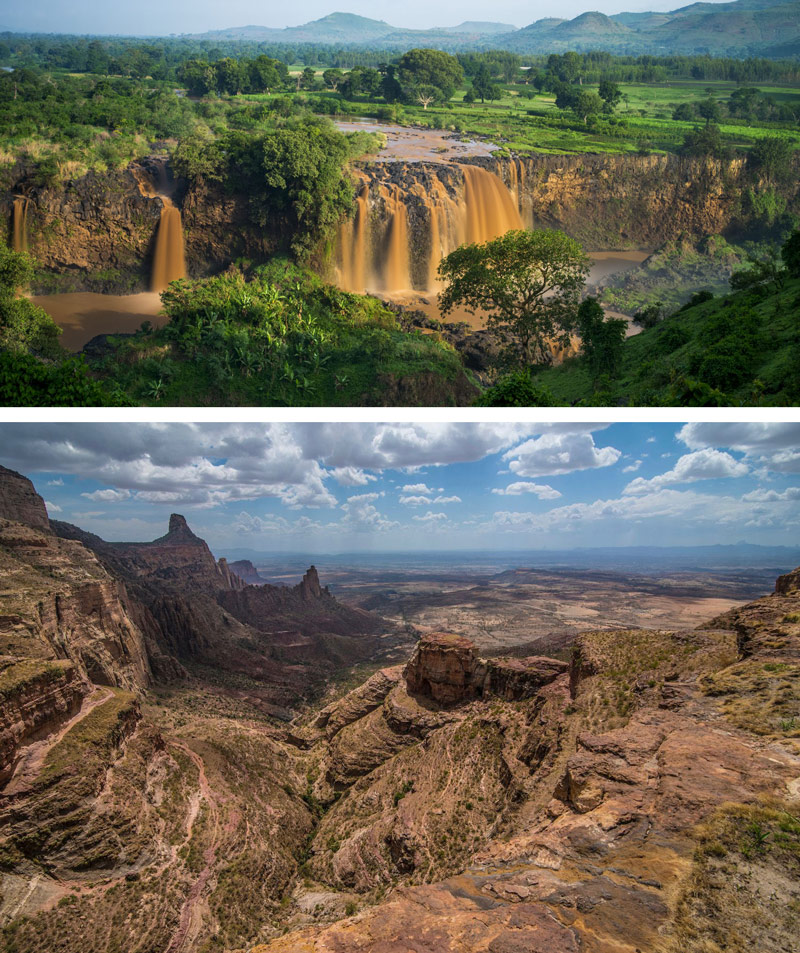 One day, the King’s wife Cassiopeia, bragged that she was the hottest babe in all the land. Even more beautiful than the Nereids, which were the nymphs that commonly hung around Poseidon…God of the Sea. Poseidon got wind of this bogus claim and it really triggered him. To take revenge, he sent out a sea monster named Cetus to destroy the coast of Aethiopia.

Here’s a closeup of Cetus…he doesn’t look so scary. 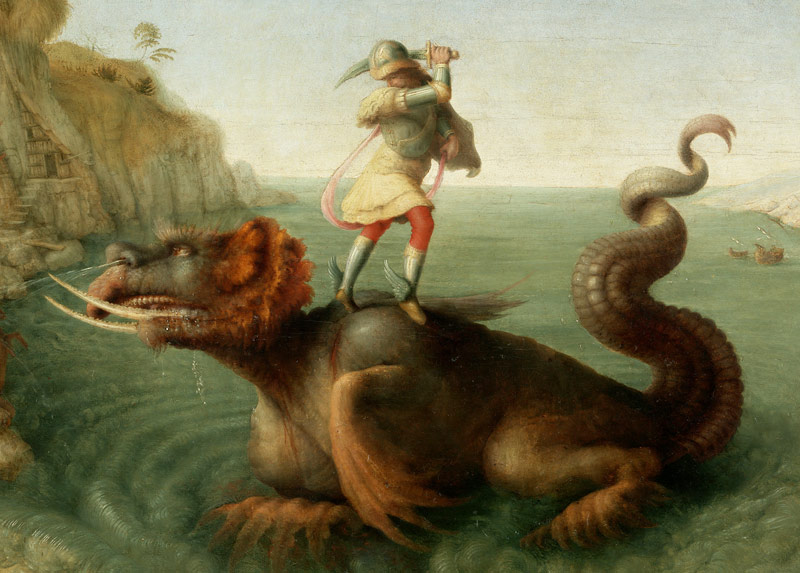 Here’s the full painting showing more details of the dramatic scene. We’ll learn the full story of the painting further below.

Cetus would be merciless and continue to destroy the entire countryside…unless. If they would sacrifice Andromeda and turn her into a sea-monster-snack, the Gods would consider it an even trade for such blasphemous comments of false beauty.

Evidently her father Cepheus didn’t have a problem with this…at all.  Next thing we know she was stripped naked and chained to some random rocks near the water. “Worst Parent of the Year Award” goes to Cepheus!

This is a detail of Andromeda chained up. Some might say the painters lived out their S&M fetishes throughout their paintings…I guess we’ll never know.

Here’s the full painting. We’ll even see some design techniques pointed out as we work through the full article. There is a nice ellipse (see Day 34) being used here to create unity and movement.

So what was Andromeda to do? Was she killed…saved…what happened? Who is that guy flying in the air on a horse? Is that a sea-dog in the water?

Perseus was quite the alpha male in his time. He was the son Zeus, God of sky and thunder. He even had a mortal mom named Danae (see #404). You might recognize these famous statues of him holding a severed head. The one on the left is from The Metropolitan Museum, and the other is from the Louvre. 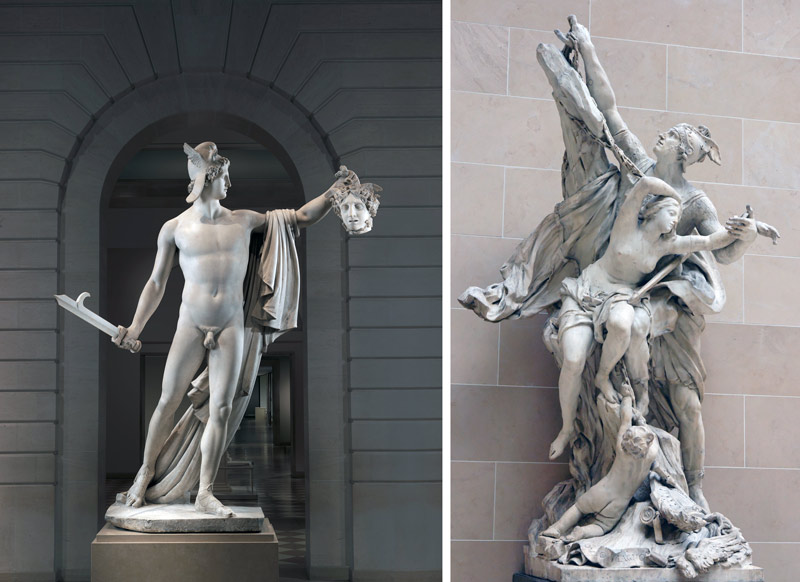 I even attempted to sketch this epic statue in the Louvre (see #576).

You know that head Perseus is holding in the first statue? That is the Gorgon, Medusa. A Gorgon is one of three sisters that had snakes for hair and the power to turn anyone into stone. One gaze and you’re stiff forever! I’m sure Medusa’s love life was full of ups and downs.

Here’s a great painting of Medusa’s head by Peter Paul Rubens (see Day 145). I believe that’s a white sack to the right. This holds the head to keep good people from looking at it. 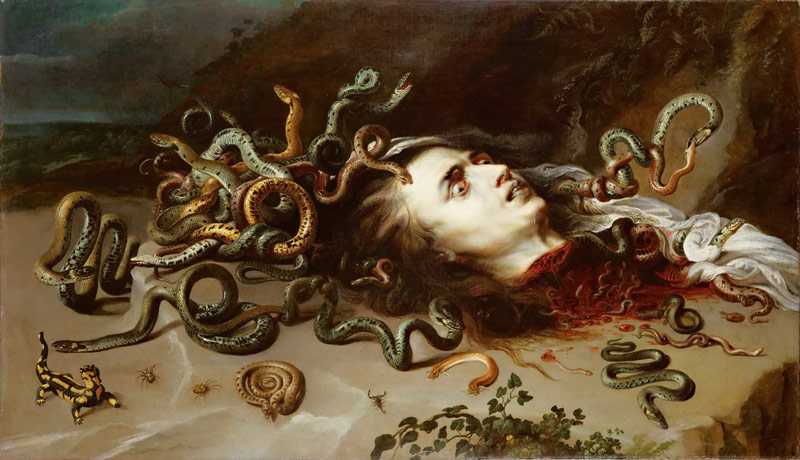 So, back to our drama filled scene.

Thankfully Perseus was cruising by on a winged horse named Pegasus. Or was he wearing winged sandals? I guess it depends on the version of the story you heard. We’ll see both versions depicted in the paintings to follow.

Either way, when he saw that there was a damsel in distress, he had to flex his muscles. After all, he had just killed Medusa and was carrying her head with him. Fear was the last thing on his mind.

This next painting is one of the best I’ve seen! It is full of great details, colors, and design. This version actually shows him on Pegasus with a sword instead of Medusa’s head. Cetus the sea monster is below, while Andromeda remains chained and stands near skulls and shells.

Here’s a detail of our hero swooping down from above. 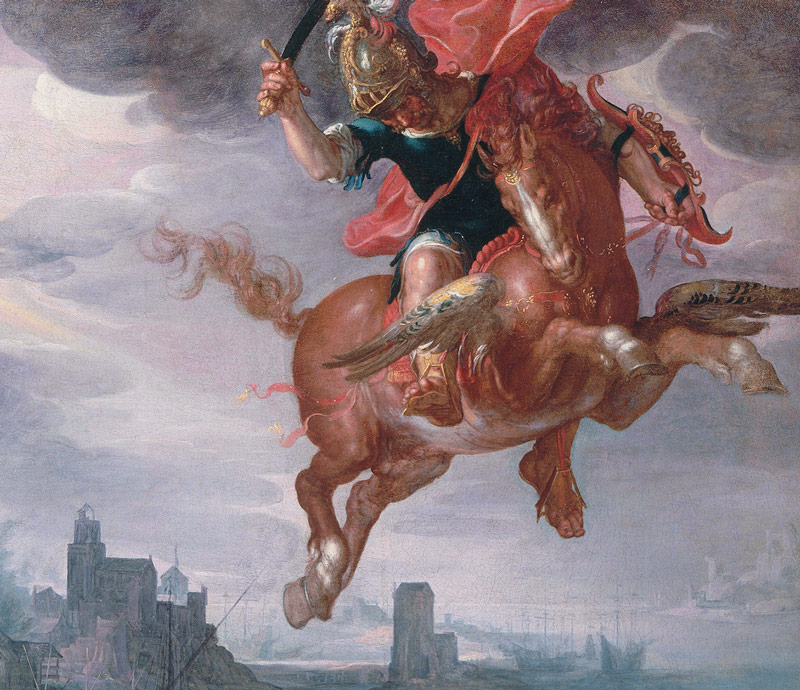 Gotta love the colors and design of this terrifyingly cool sea monster. 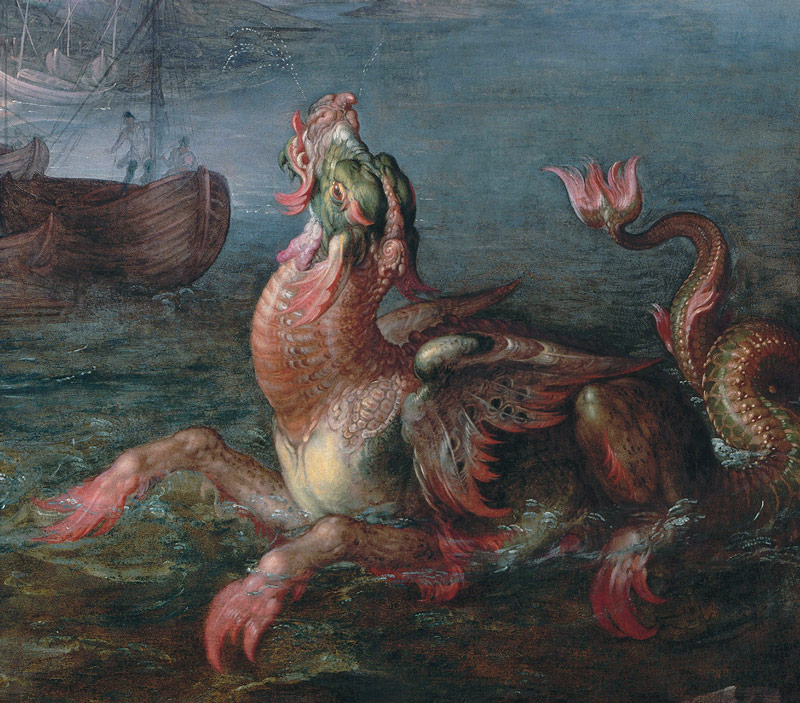 Here are more details of the bone-and-shell-covered ground.

Some nice details in the background too! 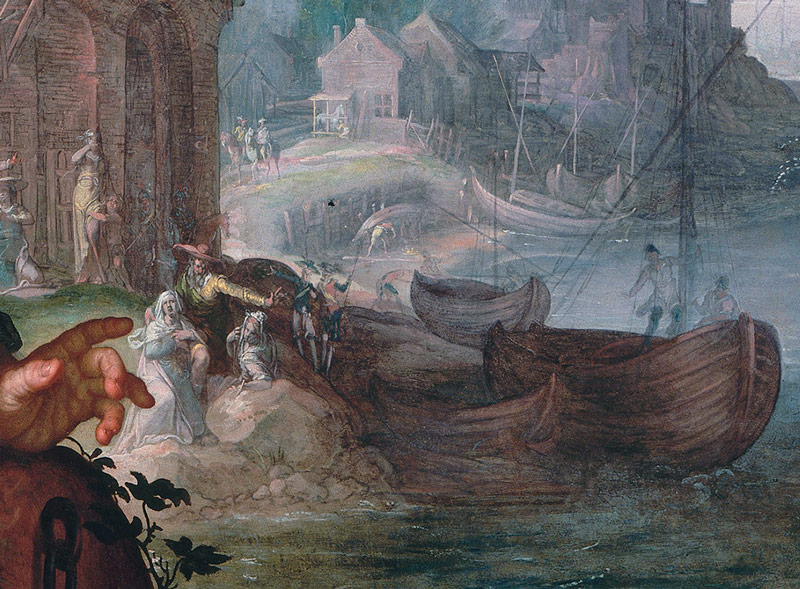 Andromeda was a damsel in distress for sure, but she was also kind of hot according to Perseus. That being said, he saw this as an opportunity to finally tie the knot and take the next step towards building a family full of mythological rug rats. He asked Cepheus if he could marry Andromeda, and the God gave him “two thumbs up.” I guess she doesn’t have a say in it? She doesn’t even get dinner and a movie first?

Check out this great version with Perseus holding Medusa’s head and a humongous shield. 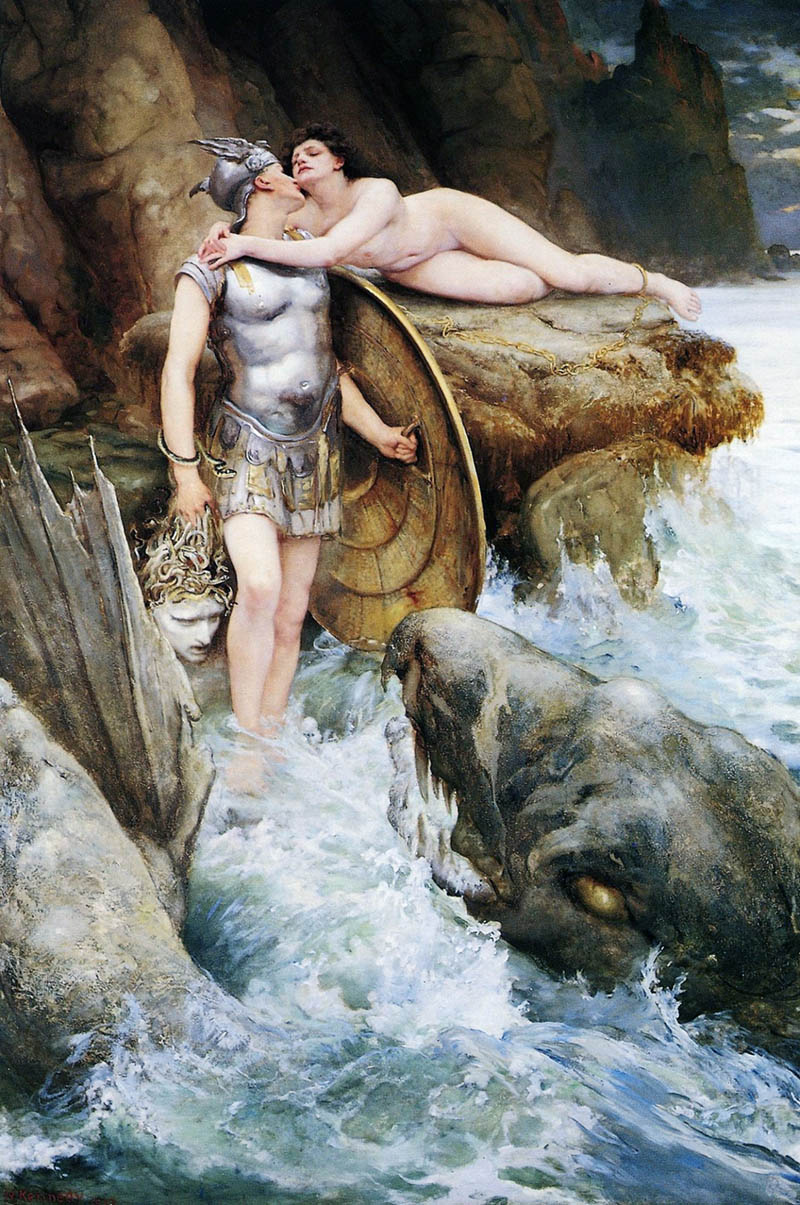 Now that Perseus negotiated the marriage deal, that was his cue to swoop down and rescue Andromeda. He told Andromeda to turn away and that’s when he whipped it out…Medusa’s head. The sea monster Cetus took one look and turned into stone. Easy kill!

In this painted version we see Perseus with a sword as well as the head. 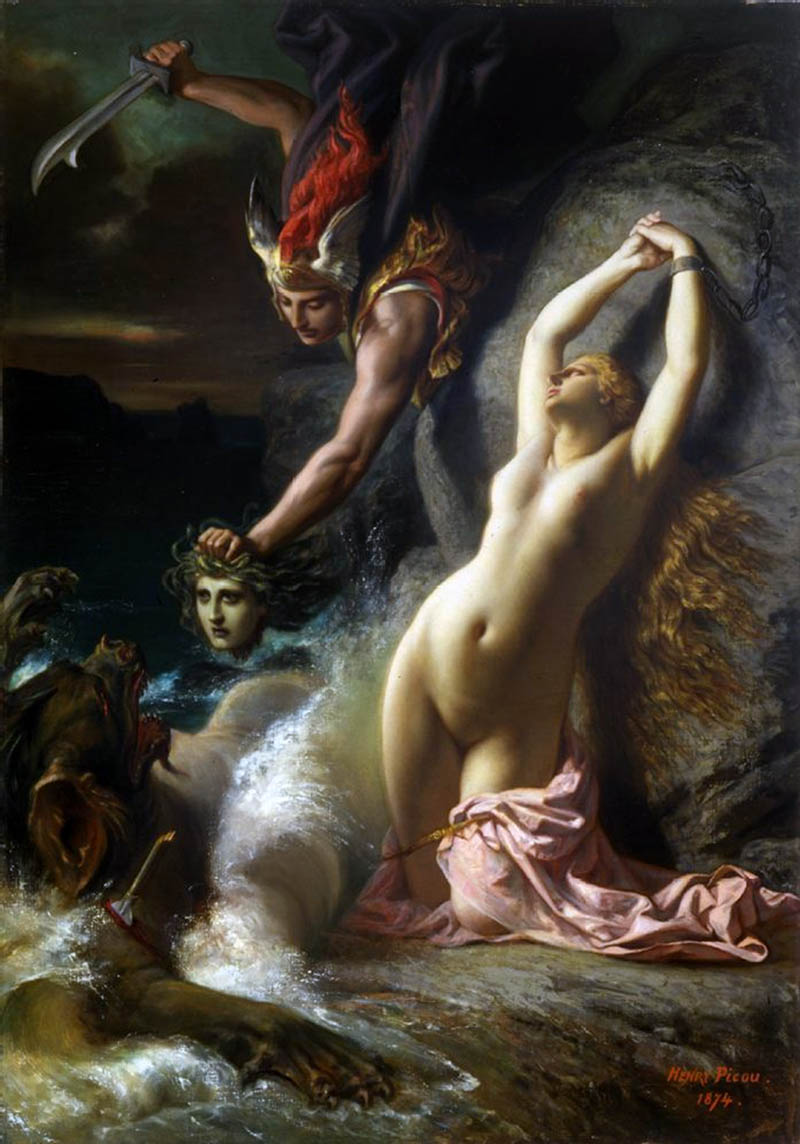 Andromeda was rescued and they eventually got married. She popped out nine kids total, and lived happily ever after.

Actually, during the wedding reception, there was a bit of drama…

Andromeda’s Uncle, Phineus, was planning on marrying her and tried to take her away from Perseus. The DJ was bumping “I wanna dance with somebody,” but it scratched to an eerie halt. Perseus wasn’t going to let his marriage be ruined by those incestual tendencies, so he did what he does best. He pulled out Medusa’s head and turned Phineus and his soldiers into stone. The cake-filled mouths of wedding guests dropped to the floor in amazement. Does Perseus always keep this creepy, snake-covered, severed head with him? Must’ve been an awkward honeymoon!

Here’s a painting that shows the dramatic wedding scene. 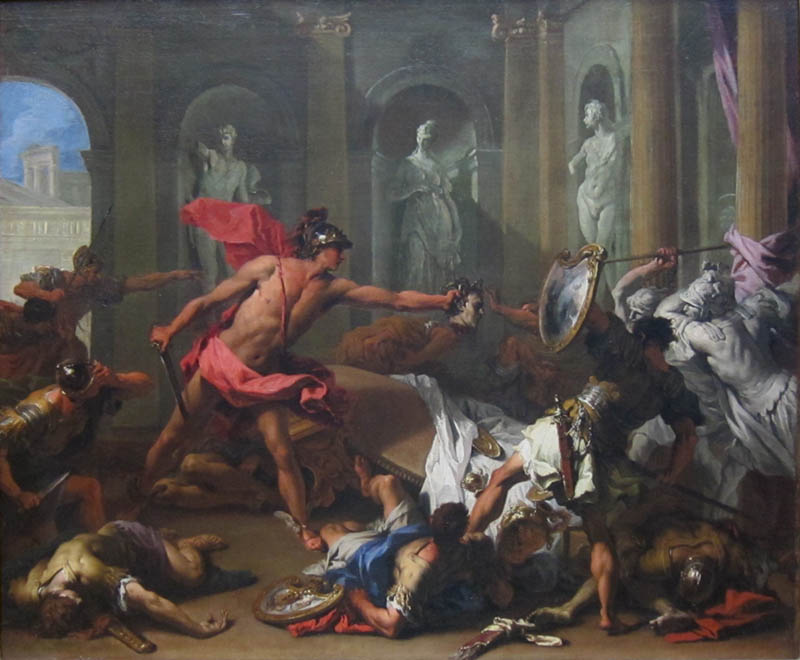 Now that you know the quirky love story, let’s look at more paintings and point out some helpful design techniques. As you know, none of these master paintings are thrown together. They are planned just like any other work of art.

Here we see Gustave Moreau creating a nice 90 degree angle to add a sense of strength to the composition (see Day 76). 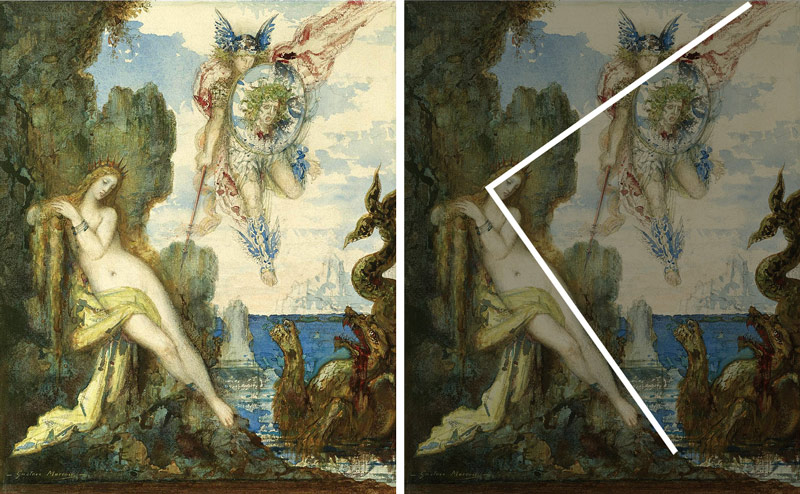 This version by Emile Bin shows his use of gamut, or limited number of diagonals (see Day 38). They are also dominant diagonals which add visual impact to the composition (see #441).

This version by Frederic Leighton actually inspired this article. I thought it was pretty epic looking and reminded me of Game of Thrones. Maybe they were inspired by this story?

We can see how nicely the dynamic symmetry grid “Root 9: Overlapping MAD 135 – Increment: 3” is lining up to the painting. Check out how the rocks and neck parallel the armature. Look at her thigh, calf, foot, arm and shoulders locking in. Nice! 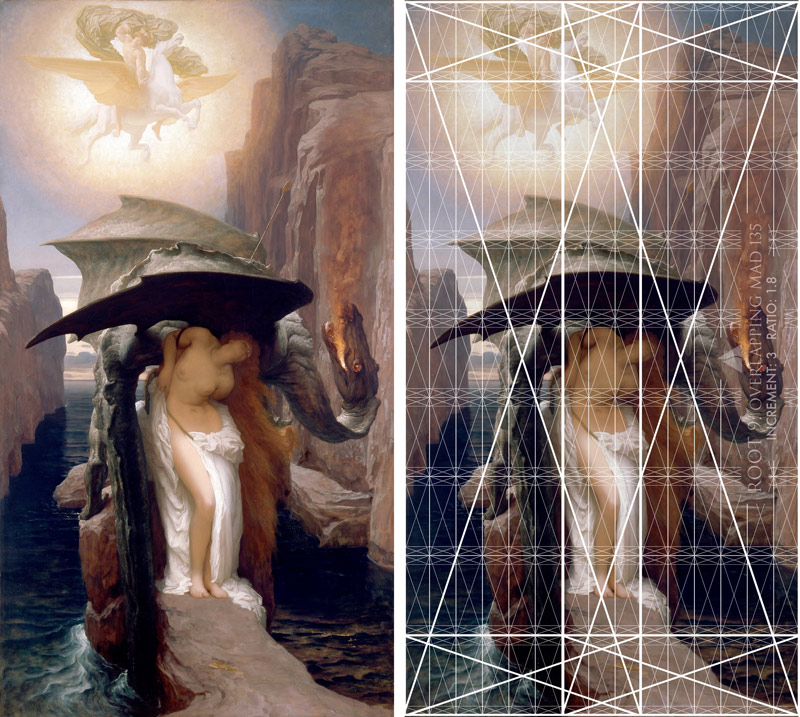 Here’s a less terrifying version by Rembrandt. He’s given us several arabesques to help with unity and movement (see Day 17). 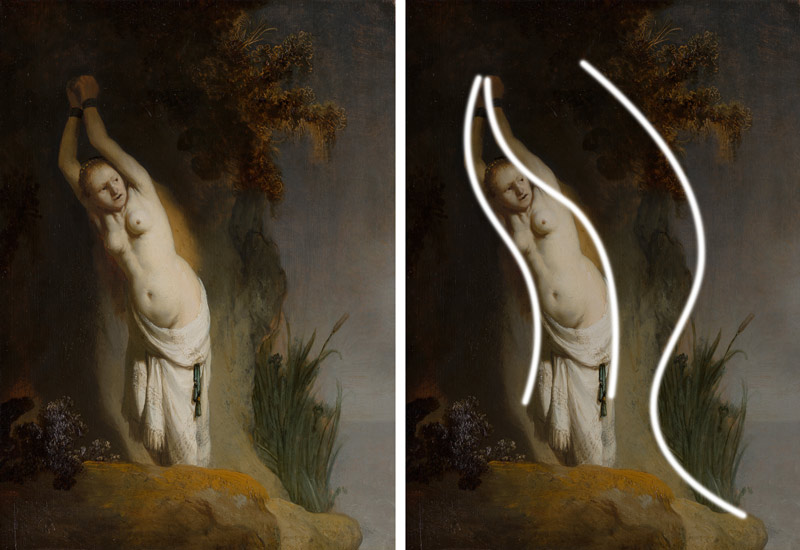 We can see aerial perspective being used to create a sense of depth in this version by Charles-Andre van Loo.

Some artists liked the story so much that they would just copy other masters and put their own little twist on it. We can see how the woman’s pose is identical, but everything else is different.

Here’s two more where the pose is exactly the same, but there are subtle differences. In the one on the left we can see the hair crossing the body, more realistic water, and no chains on the feet. Which one do you like better?

Now you can relax and enjoy the rest of the paintings. Try to look for design techniques as well as how the artist depicted the story. Did they use Medusa’s head, Pegasus, a sword, winged sandals??

Well, who says romance is dead? Andromeda and Perseus definitely met at an awkward time in their lives, but it all worked out for them in the end. These mythological stories can inspire new versions within your own work. It would definitely be fun to try and follow in the footsteps of all these masters. Not only to depict a similar story, but to use powerful design techniques too.

Thanks again for the support! Feel free to share this with other artists for inspiration. See you next time! 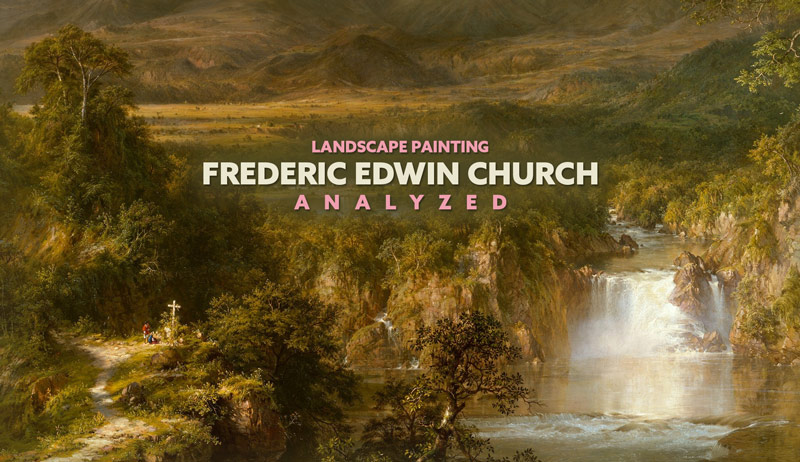 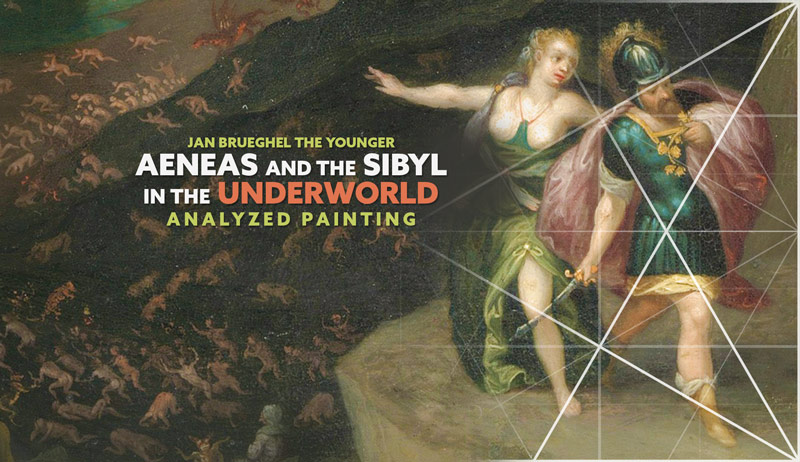